It is so easy to find picture books that go along with the theme of FEELINGS (scroll down to find reviews for this week’s picks). Maybe because it’s something we deal with every day as humans and so it resonates with authors and illustrators. Kids have a hard time hiding their feelings, like when they get that gift they’ve been hoping for and they’re full of joy. I love this picture of Rebeka when we got her a ridiculously huge Curious George for Christmas. 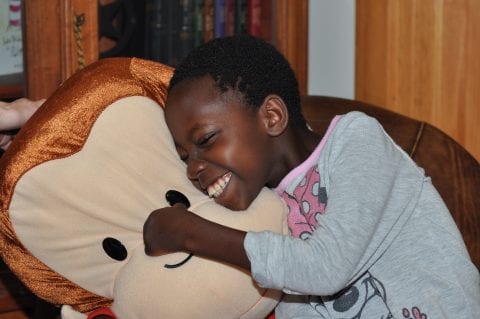 This pic is an all time family favorite. Guess who got to push the down button in the elevator, and who didn’t? 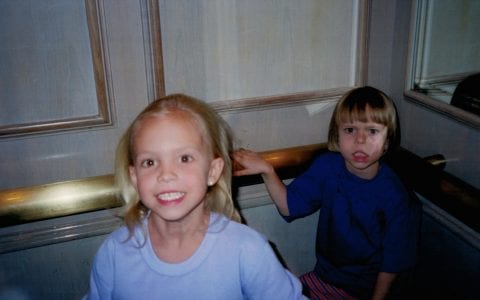 But all joking aside, sometimes the feelings are not easy or fun to deal with. A good picture book can help if the feelings you’re dealing with are negative, and honestly the book doesn’t even have to be about feelings! Just the act of sitting down together, opening a book and turning your eyes to something different for a while can help diffuse the sad/mad/bad stuff. And if the feelings are great? Well, picture books can capture that pretty fantastically, too! Just look how my friend, Anne, does it here . . . 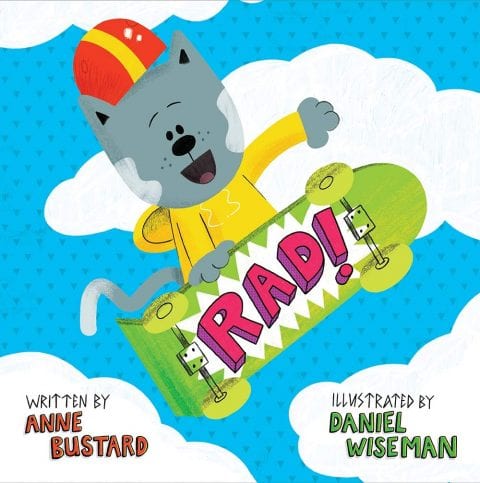 There is a lot to love in this book with spare text and bright pictures that works great for the little two year old’s in your crowd and the older kids, too. Five cool cats with rhyming names: Esther, Chester, Hester, Sylvester and Lester go skateboarding, but Lester is more timid than the others. They encourage him to practice and try but he’s afraid and worried, but finally he says, “Maybe,” then gives it a go . . . but wipes out. There’s great repetition with those fun-to-say rhyming names as Esther, Chester, Hester and Sylvester encourage Lester to give it one more try, which he does, and “Rad!” it turns out he’s got some cool moves on that skateboard. Elation! Full of confidence, he has his eye on surfboards for tomorrow, and this time his friends are worried! The last double page spread is super cute (check out the worried crab on the surfboard :-)). 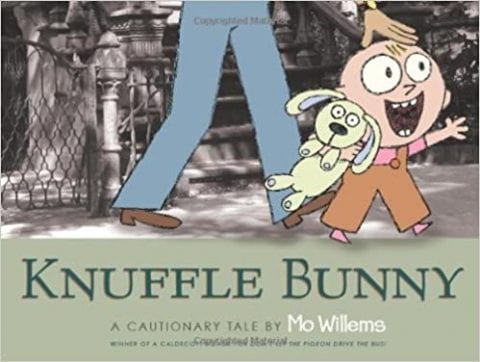 This title, this cover, it is full of Mo Willems brilliance from end paper to end paper and ALL the feelings. Little Trixie is full of excitement as she sets off to the laundromat with her dad and her beloved Knuffle Bunny. (I love the illustrations, hand drawn ink sketches laid on top of digital photography.) She has a blast playing around with the laundry (pants on head, waving around mom’s bra, while dad smiles and reached into basket to shove dirty clothes into machine, not paying attention, oh no, he’s reaching for Knuffle Bunny . . .). On the way home Trixie realizes she’s missing something and we see distress, she tries to tell her dad but she only speaks baby talk so we see major panic and frustration and anger and then they get home and mom knows immediately what’s going on so they race back to the laundromat and Trixie watches, worried as her parents search the machines. Just when Dad says Knuffle Bunny is gone for good he checks one more time and JOY, he finds the bunny! I really don’t know if there is a better display of the full range of emotions in a picture book, or a cuter name for a stuffed animal than Knuffle Bunny. 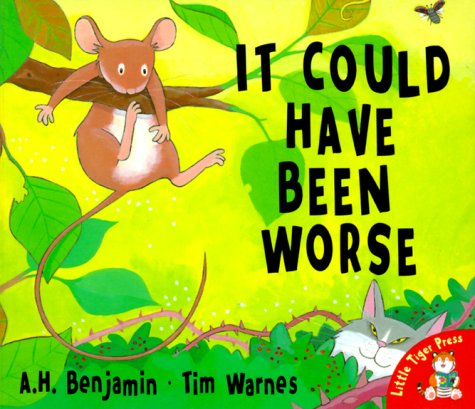 It Could Have Been Worse by A.H. Benjamin, illustrated by Tim Warnes

This book is about a grumbling mouse, and it encourages kids (and their parents :-)) to wonder about the things going on that we don’t see but should be thankful for. I’m thankful for any book that can stop my grumbling! What looks like disaster for mouse is actually salvation, and what looks like an inconvenience is a gift. He’s on his way home from visiting a cousin when he loses his balance and falls through some sticker bushes. The mouse is grouchy and says, “Ouch, this isn’t my lucky day!” What he doesn’t realize, but the reader sees in the illustrations, is that the sticker bush stops a cat that’s been chasing him. He falls in a hole and grumbles, not realizing it saves him from a hawk. It’s fun to always be in on something the little mouse isn’t, kind of like a secret between the illustrator and the reader, and at the end there’s a repeated refrain you can take with you and use again. “It could have been much worse!” 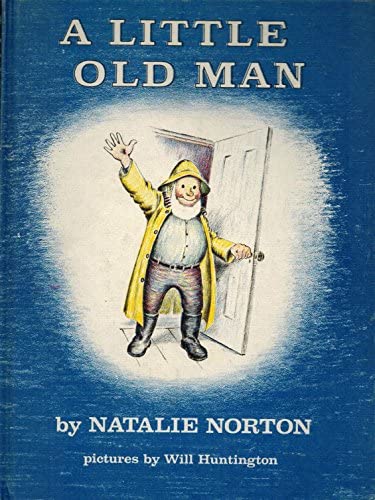 A Little Old Man by Natalie Norton, illustrated by Will Huntington

This book is really old but hopefully you can get your hand on it at a library or second-hand store. It’s such a sweet, simple world to step into. It’s about, you guessed it, a little old man 🙂 He lives “in a little house on a little island in the middle of a great big ocean.” What a great set up. All seems well, he has all he needs with food and work and a garden but he has nobody to share it all with. He’d like a cat, he even dreams of a cat. And then one day a storm comes and washes his house into the ocean, but a boat comes and lands on his island so it’s okay, he can live there instead, and on the boat is a cat and better yet, the cat has kittens! And here’s the best part, the last line is, “And the little old man was never sad or lonely again.” Ahhh. I do love me a happy ending, especially with a kitten or two curled up in it. 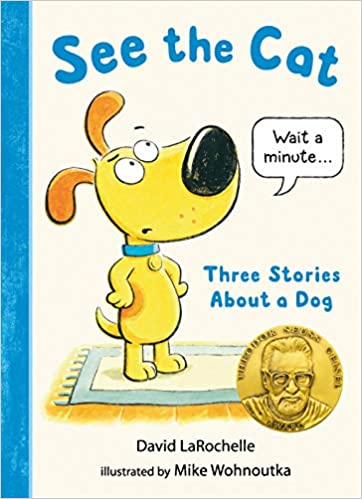 See the Cat: Three Stories About a Dog by David LaRochelle, illustrated by Mike Wohnoutka

This book cracks me up, and what’s cool about it is that it works as an easy reader and a great read aloud for storytime. The first of three short stories is the best for our feelings theme. It’s a conversation between the book and a dog. The book says, “See the cat,” and then the dog answers, in a speech bubble, “I am not a cat. I am a dog.” The book answers, “See the blue cat,” and this time the dog emphatically says, “I am NOT blue and I am NOT a cat.” The conversation, and emotions, escalate until the dog is insisting he is not a blue cat in a green dress riding a pink unicorn and then he looks behind him and sees . . . a blue cat in a green dress riding a pink unicorn (the book wasn’t talking about him!). Then we get to see what an embarrassed dog looks like 🙂 The second and third stories are equally silly and funny and clever and meta.