To see summaries of the five books we used to talk about being yourself, scroll to the bottom of this post. If you have a couple minutes . . . I envisioned doing storytime posts once a month this summer, but here we are in July and here I am with my first summertime storytime post. Ahhh, these long, sometimes lazy, sometimes crazy days of summertime! 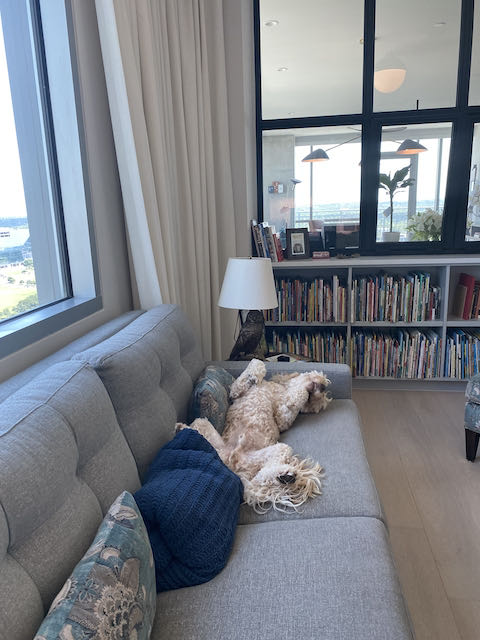 One of Humphrey’s many napping spots 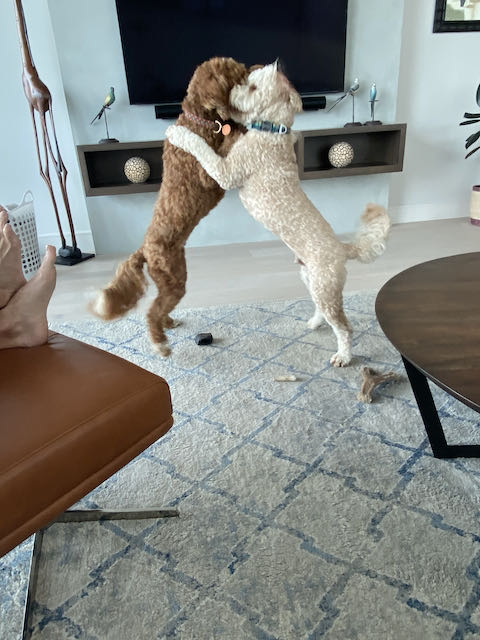 Humphrey has no problem going from lazy to crazy! (And yes, I realize Humphrey’s naps feature prominently in several storytime posts :-))He recently had a playdate with his doodle friend Penny, and those two, they have so much fun together. We were a bit reluctant bringing Penny into the condo, wondering if Humphrey would totally lose his mind since he usually only sees his friends outdoors where there’s lots of room to run and wrestle, but they were fine. Sure, they wrestled quite a bit and Humphrey only settled down for maybe half an hour in the four hours Penny was with us but no furniture was destroyed and nobody went to the bathroom inside so we counted it a success.

With dogs, pretty much what you see is what you get. They are themselves. For some reason it’s harder for us humans, young and old, and these picture books have some great reminders that we are pretty special the way we are, and we can celebrate our quirks and differences. Here’s to lazy summer days and storytimes and being yourself, no matter who you are!

I am a huge fan of Tricia Tusa’s illustrations! In this book, great for all ages with a not-too-long story, a woman named Camilla does her hair up in crazy hairdo’s like fruit baskets and forests, mimicking what she sees out her window. She never actually sets foot outdoors, in fact she lives in a tower with only a window and no door, until the day a little girl crash lands on her balcony and Camilla discovers she’s brave enough to not only venture outside, but invite people inside. It’s a story about being yourself while still stepping outside your comfort zone, and it’s worth multiple reads just to study those amazing hairdo’s! 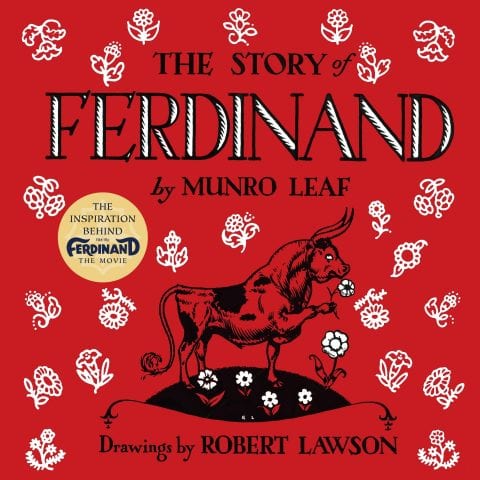 The Story of Ferdinand by Munro Leaf

Oh I love the gentle bull in this classic book, and the black and white illustrations do such a good job of showing perspective and emotion. The page where Ferdinand sits on the bee . . . but I get ahead of myself. Ferdinand isn’t like the other bulls. While they like to “run and jump and butt their heads together” Ferdinand sits quietly and smells the flowers. Some men come along looking for the roughest bulls to fight in bull fights in Madrid, and they see Ferdinand just after he sits on a bee and starts running around snorting and pawing the ground, so they choose him. Oh no! The bull fighters are so nervous when they hear about crazy Ferdinand, and there’s this great spread where Ferdinand runs into the middle of a huge crowded arena, and sits down, and smells the flowers the women have thrown from their hair onto the ground for the matador. The gentle bull refuses to fight, so he gets sent home, and he’s happy being himself, the end. What a great, great book. 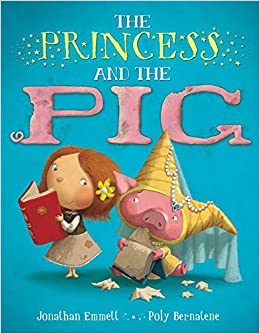 The Princess and the Pig by Jonathan Emmett, illustrated by Poly Bernatene

There’s a lot of funny nuance in this book for older kids and adults, with allusions to fairy tales like Sleeping Beauty and Puss in Boots and the phrase “it’s the sort of thing that happens all the time in books.” It’s basically a tale of mistaken identity, where a piglet and baby princess get mixed up at birth and are raised in very different homes. When the peasant parents become aware of the mistake they try and make things right, but the king and queen aren’t convinced. The peasant girl may be smart and beautiful, but she doesn’t look or speak like a real princess and so she can’t possibly be their daughter. Their daughter (the pig), is dressed in fancy gowns and jewels, and so things stay the way they are. The peasant girl (who should have been raised in a castle) gets married happily ever after to a young shepherd, and the princess pig is married to a handsome prince who is assured that once he kisses her, she’ll turn into a beautiful princess because, “it’s the sort of thing that happens all the time in books.” Except . . . not in this book! This book got a good laugh out of the kids and me. 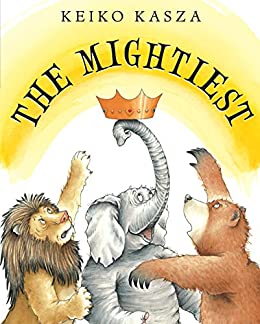 The Mightiest by Keiko Kasza

I adore this author/illustrator, and often use her books for storytime. This one was new to me but I knew it would be good and it didn’t disappoint. Lion, Elephant and Bear see a crown sitting on a rock with the words “For the Mightiest” carved on the side. They argue over who is the mightiest and will get to wear the crown, until a little old lady comes along and they decide whoever scares the lady gets the crown. Each of them scares her so much that they start arguing over who scared her most, but then a giant comes along and he takes the crown and scoops up the animals and tells them he’ll drop them over the edge of a cliff but then the old lady yells “George!” And he stops and drops the animals because she scares him. A little old lady! Turns out she’s his mama 🙂 The animals give the crown to the little old lady who was able to calm the giant, which is kind of what I expected, but then, SHE PUTS THE CROWN BACK ON THE ROCK!!! She tells them she has her little hat and it’s good enough for her, and there’s this great line, “The mightiest didn’t need a crown after all.” Isn’t that just great? 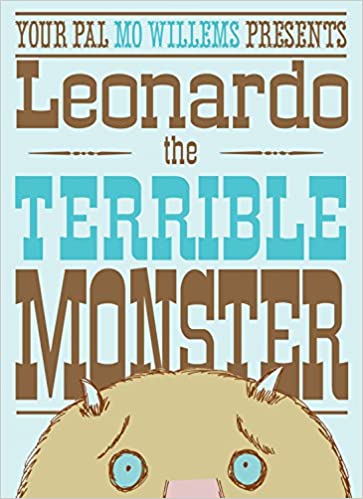 Mo Willems books are so, so good for read alouds, this one works for pretty young kids with very short text but older kids will appreciate it, too. It starts with great word play, “Leonardo was a terrible monster” could mean two things. It could mean he is really, really mean and horrible, or it could mean that he’s bad at being a monster, and in this book, it’s the latter because you turn the page and it says, “he couldn’t scare anyone.” There’s this great picture of Leonardo throwing a monster tantrum, mouth open and blue tongue flailing. What a cute monster (with human parents). I love the language, like he wants to “scare the tuna salad” out of someone. He finds a boy named Sam and he thinks he scares him but then Sam explains that he’s crying for a bunch of other reasons and not because Leonardo is scary. So Leonardo decides to just be himself, and that means being a good friend, which is exactly what Sam needs. Ahhhhhh.