“I would love to tell my story. Could you help me?”

When I got a letter from this spunky, brave, strong-like-a-butterfly girl asking if I could tell her story, I couldn’t resist. 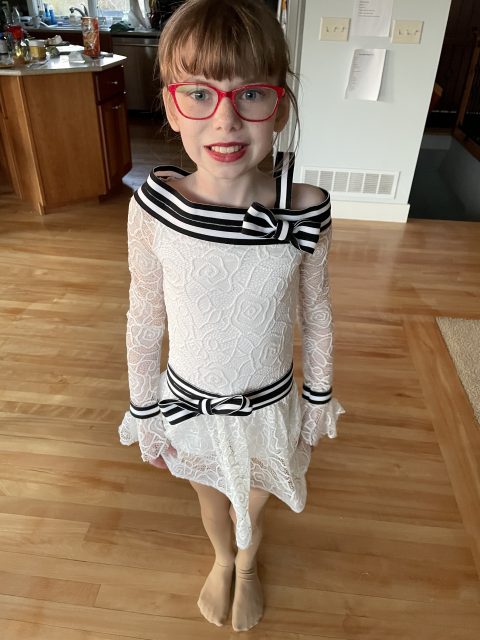 The first time I’d heard about Riley was back in November of 2021, when I got an email from her mom. She said Riley’s fourth-grade teacher was reading Her Own Two Feet in class when Riley had to have emergency surgery. 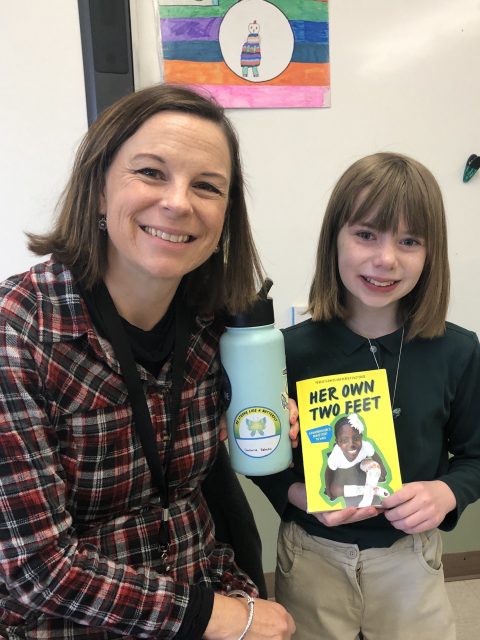 Her mom said Riley was talking about Rebeka in the surgical prep room, but at the time her mom didn’t know what she was talking about. “Come to find out, she was using Rebeka as an example of surviving anything. Riley reads your book over and over again.” I was so touched. Before Her Own Two Feet came out, Rebeka told me she hoped her story would help kids who were going through hard times, so this was really gratifying. I printed the email to send to Rebeka and sent Riley a letter and an autographed sticker for her book.

Five months later, this April, I got a package in the mail from Riley. 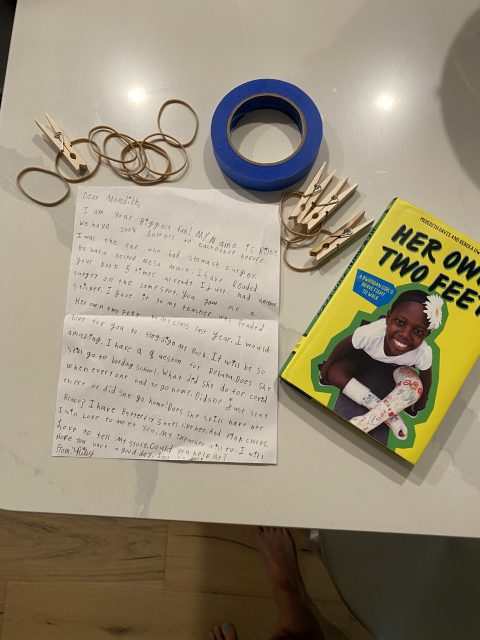 The letter, with stars dotting the i’s, said she had another stomach surgery on the same spot. In her letter Riley said, “Rebeka helped me so much.” I wanted to hear more, so I asked Riley’s mom if we could zoom so I could ask Riley a few questions and she agreed. We chatted a bit and Riley showed me her butterfly shoes and pink crocs, just like Rebeka’s. 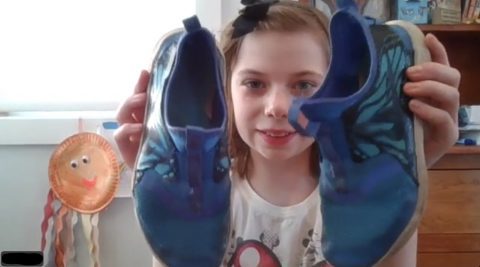 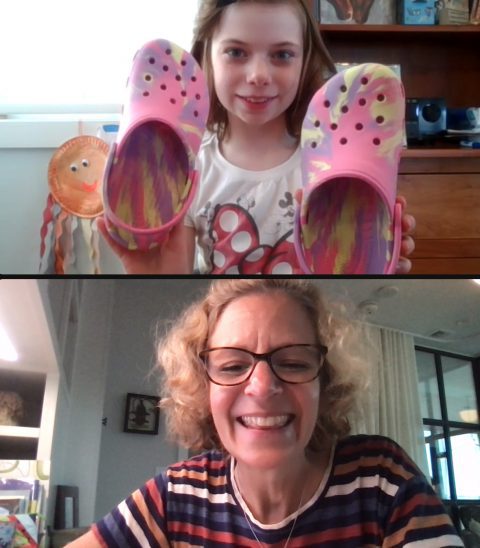 Then Riley told me about her first surgery. How she had started having bad pains the night before, and the next day after her regular doctor couldn’t diagnose what was wrong and she couldn’t stop getting sick, her mom rushed her to the hospital.

She talked about how there were so many doctors in the room, the bright lights, lots of medical equipment, and how nobody could go with her when it was time for surgery. It sounded a lot like Rebeka’s experience that we describe in the book. “It sounds scary but once you do it, it’s not scary,” Riley told me. 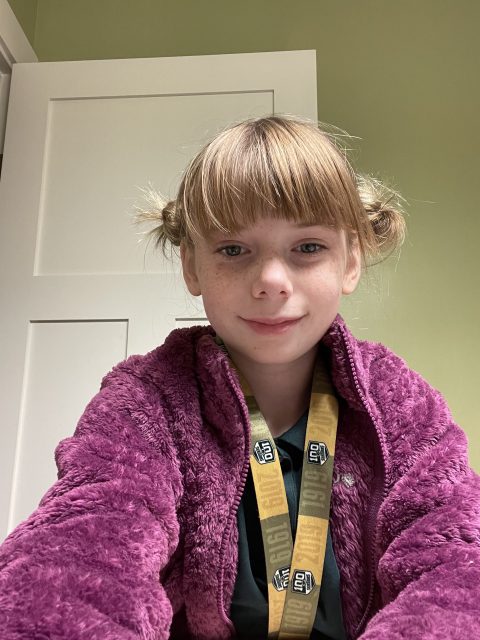 Which isn’t to say that it’s easy. Riley told me about her second surgery, how she had the familiar pains at school this time, and had to have the same surgery again. This time she got the same medicine Rebeka had before her surgeries to help her relax (Riley called it the “I don’t care” medicine), and she got to choose a flavor for the air in her mask like Rebeka, too.

What struck me about Riley is how much it helped to face a painful, frightening situation with courage because she had seen someone else do it. And now she has her own story to share with others, her own encouragement she can give. Encouragement is such a gift, and Riley is an excellent gift-giver.

When I asked her about the gifts she sent for Rebeka’s family she explained their specific purposes. In Chapter Thirteen of the book Rebeka uses tape to hang a tutu on the wall of our house. “What a wondrous thing this tape was! How Papa would love a roll.” 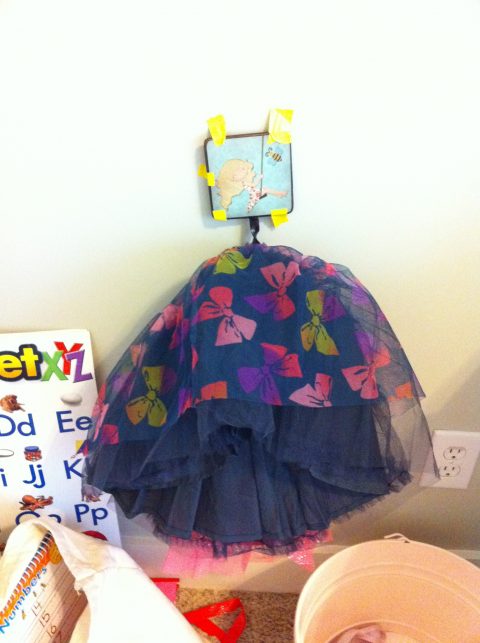 Riley explained that the clothespins can be used to hang clothes on a rope to dry. And the rubber bands? Riley remembered how Rebeka hurt her knee when she crawled on a piece of dry maize in Chapter One of the book. She imagines how someone might use rubber bands to hang the maize to dry up high, so little kids won’t hurt themselves.

Not only is she strong, and courageous, and kind, Riley is creative.

My favorite stories tell both the big moments (like emergency surgeries) and the little heartwarming ones (like rolls of tape, clothespins and rubber bands in a package.) I count it an honor to tell a little of Riley’s story here, and I hope she goes on to share it herself. She’s got lots to give. 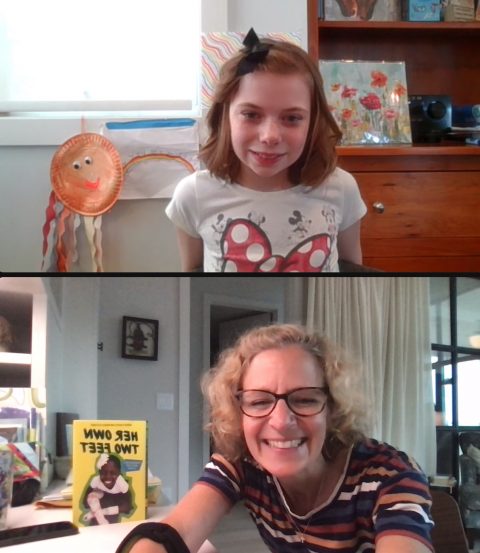 When I shared this post with Riley and her mom, before posting, Riley wanted to tell me “one more thing.” At her school library, Her Own Two Feet is in the “Heroes” section, and she thinks that is the perfect spot for our book. To the librarian who made a spot in the library for books about heroes, and the teacher who read out book to her class, and to Riley’s mom and Grandma who helped her reach out to us, and to Riley who’s sending a roll of tape, rubber bands and clothes pins across the ocean, you are our heroes. Thank you.

4 Responses to “Riley’s Story: A Girl and Her Gift”