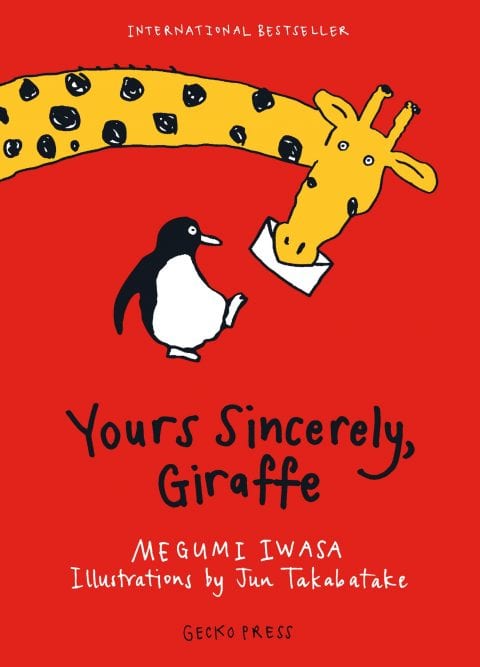 This book is strange, and maybe that’s one reason I love it. It was published in New Zealand by Gecko Press, yet another reason to love it. I generally love books coming out of Australia, New Zealand, Canada, England . . . they have a fresh perspective and seem to break the boxes of form found in American books. It’s not your typical 32 page picture book. It clocks in at 102 pages, but with illustrations on every page and sparse text it still feels picture booky.

I love that on the end flap, where you usually find pictures and short bios of the author and illustrator in US picture books, there is instead an illustration of a strange creature, kind of a winged, four-legged snake with a pelican bill standing on his hind legs. Underneath it is a simple truth, “It’s hard to imagine someone you’ve never seen.” On the first page we read, next to a picture of a giraffe pinned to the wall, “‘Write my story,’ Giraffe said. ‘It’s perfect for people who are alone. And for people who are bored. And even people who are busy might like to take a little break and read it, too.” I was so, so hooked.

What follows is a bored giraffe writing the first of many letters which he sends as far as possible across the other side of the horizon. They are delivered by a bored pelican looking for something to do, and received by a seal who delivers to a penguin going to school on Whale Island where his teacher is, of course, a whale. See, I told you, strange. And silly, and yet wonderful. It is a book about friendship and how we connect with each other and imagination. I can just see the creative writing assignment for this one: Describe what you look like to an alien who has never seen a human.

Big thank you to @austintrinity for having me spea

I am thankful to @africanewlife for hosting anothe

Thanks to @scholasticbookfairs for setting up a co