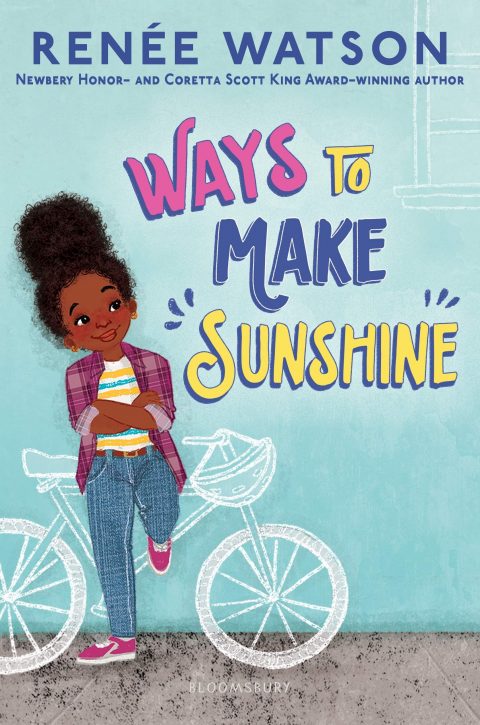 I wish this had been on my shelf a long time ago. On the heels of lots of rescheduling/looking on the bright side around here (thank you covid), I was already sold on this title. When I saw reviews comparing the main character to Ramona, one of my favorites growing up, I couldn’t wait to crack it open, and this cover . . . so cute! Renée Watson gives us Ryan, an African American fourth grader who is full of spunk from the first line of the book when she tells us, “I am a girl with a name that a lot of boys have.” But when the boy sitting next to her in class points this out to the substitute teacher she feels compelled to say, “I do not have a boy’s name. I have my name. My name is Ryan and Ryan means ‘king’ and that means I am a leader . . .”

A few pages later she races this same boy at recess and almost wins but doesn’t because she trips on her own shoelaces. She doesn’t complain or pout (even though she skinned her knee and it’s bleeding) or make excuses (even though her friend says it’s no fair). She keeps up her end of the bet and buys the boy his candy, but she buys herself some, too. She’s had a hard day, and she needs some chocolate. I like this girl.

I also like slipping into the skin of an African American girl and seeing the world through her eyes. There is a chapter where Ryan’s mom tells her not to go swimming because her grandmother recently straightened her hair, something that took a lot of time. So while Ryan’s girlfriends are all having a blast in the pool she has to hang out on the side in her swimsuit and just get her feet wet. She can’t stand it, so finally she ties her hair up in a scarf, pulls on a shower cap and jumps in for a holding-your-breath contest. She wins, but the consequences are dire. My heart broke for Ryan when I saw the illustration, her eyes closed so she doesn’t see yet what everyone else does. 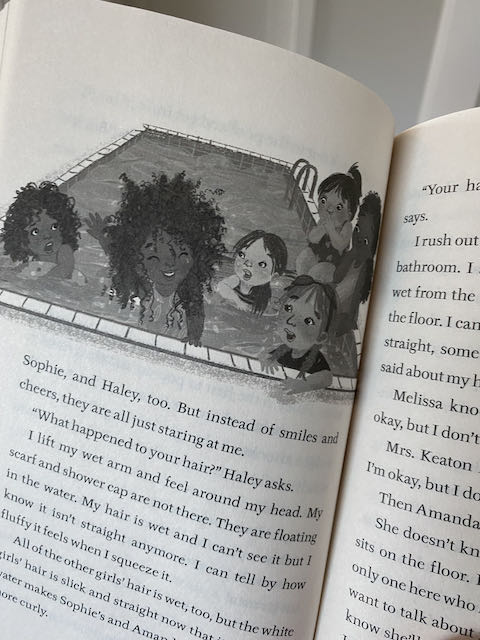 One of the girls says, “Your hair looks like it got electrocuted!” It is the perfect description spoken just how a fourth grader would say it; so, so mean. So heartbreaking. And yet you can just hear the giggles, right? We’ve all been in those circles where some clever person came up with the perfect insult that made everyone laugh. It’s brilliant how a book can give a reader empathy, build it, and word by word change the world by changing a heart, reader by reader, story by story. Whether that reader is the teaser, or the one who has been teased.

Fast forward to Ryan looking at herself in the mirror. She’s combed out her wet hair, pulled it into a rubber band making a “big, big Afro puff.” She says, “I like the way my hair looks like one massive storm cloud, how if I stretch it, it boings back into place.” Ryan decides to “try to be the beautiful person Grandma says I am.” This book is filled with goodness. Parents that love Ryan and want her best, a Grandma who speaks truth to her, and a stable church she’s gone to forever where she’s been nurtured in their Easter tradition of reciting poems. There’s a teacher that understands her quirks, friends who love her no matter what, and a market with sugary elephant ears. Sure, there’s plenty of conflict. Her dad loses his job, they move to a smaller house that’s run down, and she doesn’t have a talent for the upcoming show but ungirding Ryan’s world is sunshine and hope and positivity. I checked this book out at the library, but I’ll be buying it and adding it to my shelf.