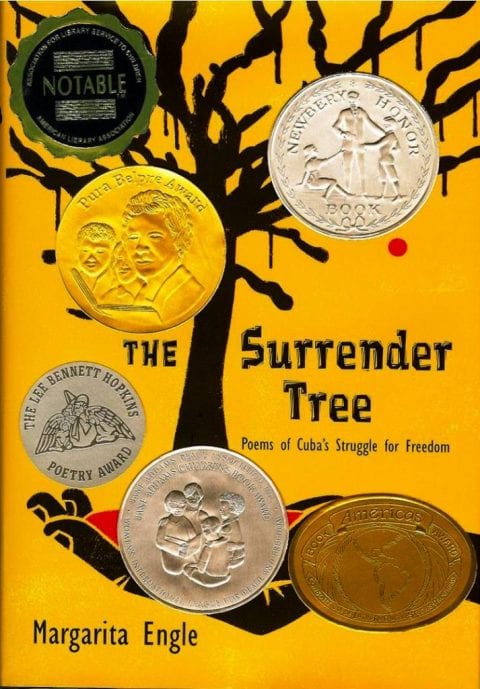 Just look at all the medals on this book! I learned so much about a small sliver of Cuban history (1850-1898), a subject I had never really thought about or pursued, and it made me realize how much I don’t know of the suffering and triumphs in this world. The format, history in verse, drew me in, along with the beautiful writing. The short poems, rarely longer than a page, use spare details to paint pictures:

We bring wanted posters from the cities

with pictures drawn by artists,

pictures of men with filed teeth

and women with tribal scars,

And later, this description:

People imagine that all slaves are dark,

but the indentured Chinese slaves run away too,

into the mangrove swamps,

where they can fish, and spear frogs,

Arching over these precise poems is the story of a girl hiding in caves and healing the wounded, and Lieutenant Death who hunts down escaped slaves. Reading this made me want more, and I have since become a huge Margarita Engle fan.

Thank you @adriannacuevas for making some great #m

Thank you @lizgardensalad for telling me to get al

Thankful for the kids at Helping Hand Home who rea