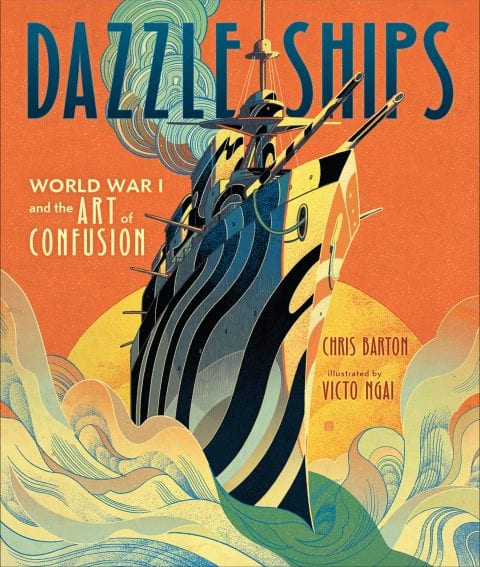 I love stories that dive into obscure details. I never knew that during WWI, British and American ships were painted in crazy patterns so that submarines wouldn’t be able to tell which direction they were headed, so that when a German sub launched its torpedo it would miss. That’s crazy! This is the kind of book that could flesh out a history teacher’s unit on WWI, a picture book with great pictures and clever text that engages kids as well as adults. The author, Chris Barton, recently sent a newsletter with a link to this series of articles on why picture books should be used in middle school classrooms that was compelling, picture books are for everyone! Chris Barton writes lots of nonfiction picture books that should be used in classrooms as well as homes, and he has a knack for giving information as story, my favorite way of learning. So why did I choose this one for my virtual bookshelf? Why would I put it into my friend’s hands and tell them “you have to read this one”?

Yes, I’m a little smarter after reading Dazzle Ships, I have more head knowledge. But my heart is also touched when I read how scary it was to cross the seas, and how Germany’s goal was not only to sink war ships but those carrying food so they could starve Britain, its strongest opponent. I love that Chris dug deep into research and included the fact that two dozen women graduates from art school helped Norman Wilkinson come up with the designs for the ships. But I think my favorite part of this book is when Chris says at the end, ” . . . a willingness to tackle problems by trying the unlikely, the improbable, the seemingly bonkers will always be needed.” There is truth in this book that goes beyond the amazing story. Kids and adults alike will be inspired, and reminded that thinking outside of the box can have some pretty dazzling results.